Luxury furniture store, A Special Place, was preparing to shut its doors after 39 years in business. They needed a quick, cost-effective way to promote the closing sale and clear more than 2 million dollars in inventory. A tactically contextually and geographically targeted campaign delivered the buyers. 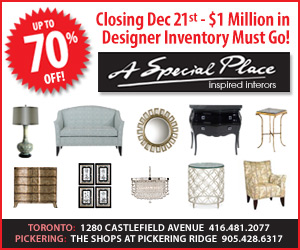 Up Marketing set up a Google Search & Display Campaign that was geo-targeted to a radius around each location, combining furniture targeted keywords with “sale” modifiers and the names of prominent area retailers and home design destinations. In addition to Word Ads, Display ads were created that included clear indicators that this was a final liquidation sale with up to 70% in discounts. These were presented over the Google network on sites like the Globe and Mail and Toronto Star to people who had recently searched with any of our keywords.

Over a 6 week period the campaign generated over 2,850 clicks and 850,000 impressions for a cost similar to that of a single ad in the Toronto Star. Not only did the clicks bring traffic directly to A Special Place’s website, the display ad impressions exposed the sale to hundreds of thousands of people living, working and shopping in the target area.

A Special Place’s final sale was a successful finale to four successful decades in business, assisted in no small part by Google’s powerful search engine and Up Marketing’s targeted Search & Display campaign.

Just wanted to tell you that we are really happy with the work and the roll out so far – highway signs and banners in Green P look amazing and I know will really improve our profile. Thank you!